The series, produced by Poker Central and CakeWorks will drop May 10th on PokerGo. 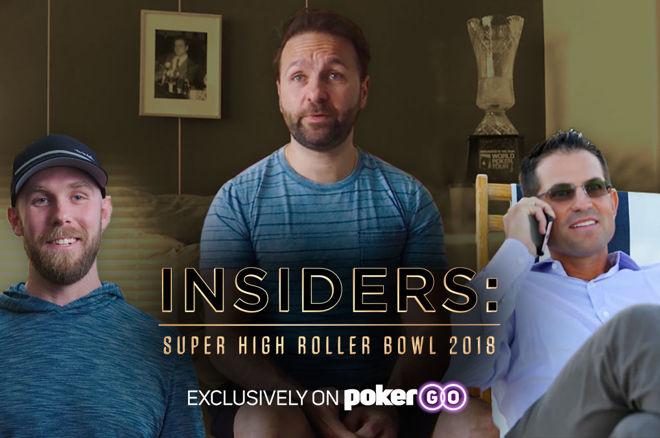 The newest series on PokerGo will feature Daniel Negreanu, Brandon Adams, and Seth Davies, as they prepare for the upcoming 2018 Super High Roller Bowl.

The $300,000 buy-in event will run between 27-30 of May, with 48 players entering the field. 30 of them were selected by a random lottery and then an additional 15 VIPs (picked by ARIA Casino and Poker Central) joined them. The rest 3 seats are up for satellite winners. (If you think it’s impossible for a qualifier to hit a huge payday, click here!)

The Super High Roller Bowl(SHRB) is one of the most popular events amongst the high-roller regulars, as they charge no rake and the field is usually softer than in an average buy-in event. The tournament was first organized back in 2015 when Brian Rast outlasted a field of 43 to take home $7,525,000. Rainer Kempe, the winner of the 2016 edition walked away with $5,000,000 while last year’s champ, Christoph Vogelsang earned $6,000,000.

The series will include seven episodes, all of them offering a behind-the-scenes look at how the top pros prepare for a tournament which can even be life-changing for them and to have a glance at their daily life.

“We wanted to give our fans a new perspective on poker – an inside look at the training it takes for these high stakes players to be at the top of their game,” said Sam Simmons, vice president of content at Poker Central. “We look forward to highlighting the intense preparation that Daniel, Brandon, and Seth undergo in their own unique ways leading up to and throughout the Super High Roller Bowl.”

Even two-time boxing champ, Shawn Porter will show up at some point of the show, which is produced partially by Emmy-winning producer Jesse Cook (known best for “All Access”).

The trailer of the show is already available:

PokerGo is the number one poker streaming and content-creating channel, producing exclusive content with the likes of Super High Roller Club, The Legend of Bobby’s Room.