Many rumors have been flying around since the last round of the first match, but now some interesting additional information hit the public. 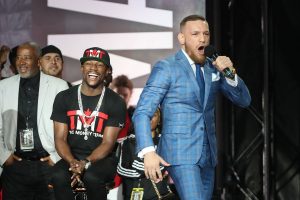 Floyd Mayweather and Conor McGregor made history when day entered the ring on August 26, 2017. Even though the fight itself wasn’t nearly as competitive as expected from the fans, the numbers spoke from themselves, revenues reached the sky. Both fighters walked away with 9-figures in their pockets.

As the odds showed, the boxing legend was a huge favorite and he managed to live up to the expectations and came out ahead. The next fight said to be an MMA-match, which gives the Irish an extreme advantage, as this format is clearly his field.

When asked, Floyd said TMZ, he’s applying for an MMA license and expressed his hopes for a possible rematch: “Everything takes time. Eventually, we’re gonna apply for the license, and hopefully, we can fight,”

Rumour has it, that the Las-vegas based boxer is planning on training against Tyron Woodley, but it is not clear yet when he will be ready for Conor.

The huge experience- and age-advantage makes McGregor so big of a favorite, that many people believe the fight is pointless, but the first bookmaker has already listed odds for the potential rematch.

Do you think there is a real chance for the fight to happen or is just a baseless rumor? Let us know in the comments!