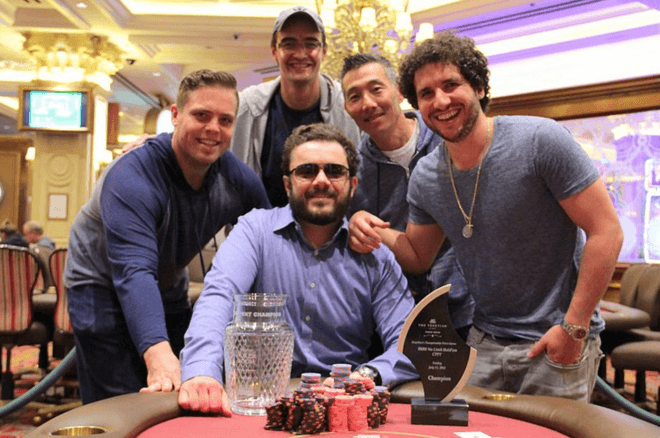 “I’ve been looking for a good excuse to take a break,”

The five-day long tournament with two starting flights attracted many well-known players. Naturally, the final table of 9 was also made up of the biggest names in poker, all looking to end the summer grind in Vegas with a six-figure score.

Former WSOP Main Event winner and high-roller regular from Sweden, Martin Jacobson couldn’t manage to achieve this goal, as he finished 9th for $48,068 after his Ace-Jack ran into the Ace-King of Stephen Chidwick‘s.

The runner-up of the 2013 WSOP Main Event, Jay Farber might’ve seen better days at the table, but he’s certainly not unhappy with his performance, as he got 5th, worth $134,083.

Stephen was followed by Bryan Piccioli on his way out, when the latter fell victim of Jones’ in an Ace-eight vs nines confrontation. Bryan received a paycheck of $237,808.

Zinno was able to take over the lead and he got a lot of help from the deck in the final hand. The hand saw Jones opening with Ace-king and 4-bet shoving to the 3-bet of Zinno’s who held Ace-jack.

A king-high flop seemed to end close the hand quickly, however, Anthony managed to spike running Jacks for trips and took down the whole thing!

“He hit the king on the flop, and once I saw that I actually started mentally counting out his stack to see how much I was going to have to pay him,” Zinno told after the tournament was over. “I was completely ready to pay. The jack hit the turn and I just kind of shrugged it off, but all of my friends on the rail started calling for another jack and it just hit. I haven’t felt genuine shock like that in a long time.”

“I’ve been looking for a good excuse to take a break,” Zinno said after the win. “I’ve been grinding, almost nonstop, for the past few months. I had just one night off the entire WSOP. I was on a mission to get another win. So, this feels like a good opportunity to take a nice, long vacation. I pulled out a win, and now I can reward myself and focus on things I’ve been neglecting while I’ve been concentrating on poker.”